A Taste Of The Med In The Ayr

Changes, changes changes!  Welcome to ‘Lothian Young Birder’, for one. I can’t be bothered getting round to changing my web address, so that will just have to remain ‘aberdeenshireyoungbirder’, even though that stage in my life and my birding is now sadly behind me. I write now from my new base in Glasgow with the knowledge that in just a few days time I will be off to university in Edinburgh for four years. This monumental change in my life will inevitably make birding a more irregular feature for me, especially this autumn, as I will have other more important priorities. Nonetheless though, the move does represent a new era in my birding: a new coast to work, a new patch to find. A whole new birding experience awaits. Exciting stuff. Hopefully at some point my first post from there will appear.

Alongside Lothian, occasional birding in and around Glasgow and SW Scotland will make up the entire component of my Scottish birding herein. My first taste of this came on Monday, and I am glad to say it began with a bang. On Sunday evening, after a day of rain and strong southwesterlies, the offer was put on the table for a seawatch at Saltcoats for the next day, a last bit of birding before concentrating the mind on uni.  Needless to say, I accepted. I hadn’t birded with Dad for a while, and any opportunity to kick off a new era of birding in SW Scotland was inevitably going to be taken.

So on Monday afternoon, we struggled our way through the chaotic mass of cars along the M8 and wriggled our way south-westwards through the rolling pastures of North Ayrshire and out the other side to Saltcoats. Saltcoats itself is a weathered, flat town: its modest, undecorative houses hardened by rain, by chill, by storm. Yet its seafront offered an escape from that dreariness. Rising from the boundless sea, is the conical shaped island of Ailsa Craig. It has no width, no bulk to it. It merely sticks heavenwards, volcano like from the depths of the Firth of Clyde. A mile or two to the north, the mountainous Isle of Arran, where I went as a younger child, stretches for a few miles from north to south. Throughout the seawatch, a shaft of golden sunlight illuminated the two islands and lined the sea in the foreground as we stood several miles off under a static sheet of opaque grey cloud.

I felt an inherent desire to be out to sea, to get closer to the islands, to be nearer the teeming masses of Manx Shearwaters that were banking off Ailsa Craig. 400+ Manxies were out there over a two hour period, many just milling about endlessly. They were all miles off, but their starkly demarcated uppers and unders glinted through the scope even then, as they moved in impeccable flamboyant formation sometimes in groups of 100 or more.

The forecast had been for a strong South-westerly, as there had been in Glasgow that morning. At Saltcoats however there was little to no wind, hence the sea was flat as a millpond and seabird passage as a whole was really pretty stagnant whilst we were there. There was barely anything else passing through and little to entertain apart from the Manxies, which were very distant anyway.

An hour and a half passed and we hadn’t really had anything else of note. I was starting to feel as if it may be time to give up the ghost and return when conditions were prime.  At this point I finally picked something up about half way out towards Ailsa Craig, considerably closer than any of the Manxies. It was clear that it was a shearwater sp., but it appeared to be migrating low and determinedly northwards on loose, unpowerful wingbeats with very little shearing involved whatsoever; unlike the over elaborate shearing of the milling Manxies in the distant background. The laboured flight action alone was enough for me to flag the bird up as interesting and to alert Dad that it was not a Manx, as it headed towards the southern tip of Arran. Whacking the zoom up to 60x on the scope for closer examination revealed a pot-bellied, rotund shearwater with broad wings that was smaller and shorter-winged than Sooty, exhibiting chocolate brown upperparts and no white flank patch whatsoever. It sheared tamely a few times, showing clear brown patches on its axiliaries and dark undertail coverts, contrasting with its off white underwing and belly.

I was well aware by this point that I was on a Balearic Shearwater! On the bird consistently, I shouted across to Dad, who still hadn’t got it, largely due to the fact that my excitement was causing me to give truly dire directions! Eventually he got on to it as it passed the northern tip of Arran, and we were both able to manage prolonged views as it chugged its way northwards. Eventually, after a couple of minutes consistent views on my part, it was lost to view. Score! Not only was this a long overdue lifer for me, but what was far more exhilirating was that we’d just had a Balearic Shearwater in Scottish waters. I had definitely not expected my first to be in Scotland: more so off typical sites in Cornwall or Dorset. Given how tricky they are country wide, this was a very valuable Scottish first for us both.

We decided to hang on for another twenty minutes on the off chance something else might pass through. A Red-throated Diver flew north after about 10 minutes. As I followed the diver, Dad called from out the blue: ‘another Balearic !’.  He was considerably better with his directions than I was, so I was able to pick up our second Balearic Shearwater of the day to the north of Arran, at about the same distance as the last bird, completely on its own and again heading northwards.  A fresher bird than the first with slightly less prominent axiliary patches and darker underparts, this individual was briefer given that it was only picked up late on, lost to view within 45 seconds. Fantastic! 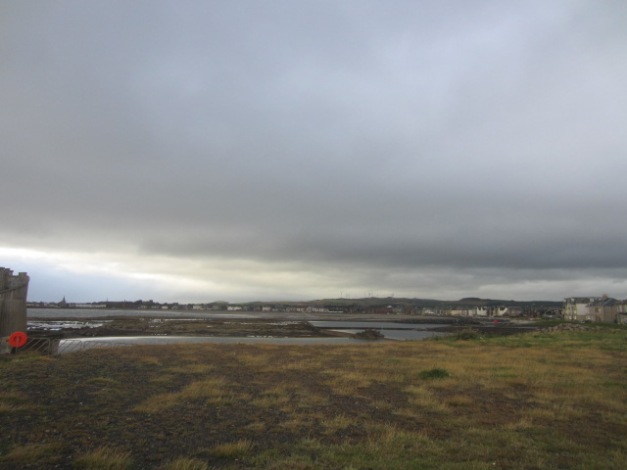 looking northwards towards Ardrossan from Saltcoats

We were starting to feel increasingly peckish so thus called it a day just afterwards, leaving the lure of the islands behind us. It had been a bit of a shearwater fest. Whilst it was quiet as a whole passage wise on Monday, the experience reminds me how much I have yearned for decent seawatching as an east coast birder. On my first bit of seawatching and indeed birding in the Clyde area, it has come up with the goods with a UK bogey and a very valuable personal Scottish first. An immensely enjoyable afternoon and start to my birding in this area; I am very much looking forward to returning in prime conditions. Long-tailed Skuas galore? Yes please!!