When I was growing up in Aberdeenshire, I had two main patches: Girdle Ness and Loch of Strathbeg. Both of them were well known, well watched spots that are reputed to be among some of the better birding sites in Scotland. Thus despite meriting the status of a patch in terms of how often I checked them, they never really had that truly personal, underwatched and unchecked flavour that so defines an exciting patch. When I moved to Edinburgh last year I told myself I would find a very underwatched coastal site within reasonable distance of where I am living that has ample potential to find a scarce or two. A few months into my first uni term and I found it: Cramond. I can safely saw now, this has become my Costessey H.P.E. of Lothian and Scotland. Comparatively it has its major perks in that it is on the coast and has far more potential to produce a range of species than Costessey, yet perhaps it doesn’t quite have that deeply personal tinge that that truly private patch does. It is, however, still an underwatched area with plenty of room for decent finds.

Cramond is situated a few miles to the North West of Edinburgh, a quaint little village by the River Almond which leads out onto a truly beautiful estuarine expanse by the Firth of Forth. Whilst the estuary’s mudflats are only magically exposed for a few hours each side of low tide, the site has ample potential for waders, gulls, terns and any number of saltwater faring species. Indeed, it has held both white-winged gull species and Med Gull, Black and Roseate Terns, uncommoner autumn passage waders (Curlew Sandpiper, Little Stint etc.) as well as the odd Nearctic including Pectoral Sandpiper in the past. Perhaps the best species it can lay claim to was a single Tegmalm’s Owl that was present on Cramond Island all the way back in the 1880s (slightly too long ago)!

Whilst its track record for rare waders and gulls is not particularly prolific, I am determined to try and change this through persistent patching at this very promising site for many years to come. As with Costessey, I know that the motivation of Girdle Ness patcher Mark Lewis’s Patchwork Challenge, in which Cramond has places in the Coastal Scotland and NGB leagues, will prove a major factor in producing  future patch gold here. To get an idea of the different areas of the Cramond patch, take a look at the below and link them with the markers on the map above. Apologies for the properly rudimentary pics; I will get more in better light conditions when I have a better compact digi-camera!

River Almond & Cramond Walkway – The initial stages of the Cramond Walkway along the River Almond mark the southernmost boundaries to the patch. Here there is decent riverine habitat suitable for species such as Dipper, Goosander and Kingfisher, and woodland for passerines.

Long Green Woods – aptly named, these woods mark the westernmost boundary to the patch and provide a decent number of woodland species and the odd thermalling raptor, at their southern edge they blend seamlessly into the woodlands along the Cramond Walkway. 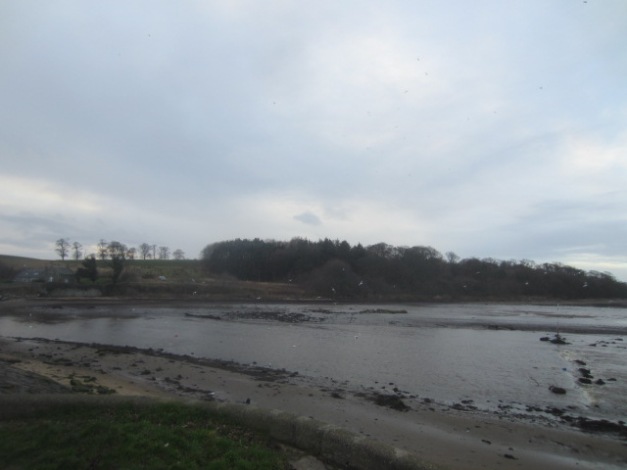 Almond Mouth – the mouth of the Almond signifies the entrance into the Firth of Forth and the mudflats. The small creeks here attract large numbers of Larus and several duck species, whilst on a rising or falling tide many of the area’s waders can often be viewed at close proximity before they either branch out across the flats or head to Cramond Island to roost.

Cramond Mudflats – extensive tidal mudflats that are only visible two or three hours either side of low tide. Regularly attracts large numbers of commoner waders, including healthy numbers of Calidrids, all year round, as well as roving groups of Larus, some of which can be viewed from very close range along the causeway to Cramond Island.

westwards across the mudflats

looking onto the mudflats from Cramond Island

Cramond Sands – a small beachy area allowing even closer proximity to the mudflats and the Firth of Forth, with potential for roving winter passerines such as Snow Bunting and early spring migrants such as Wheatear.

Cramond Island – probably the most exciting and mysterious part of the patch. This is a small, easily walk-able and wooded island with various decent seawatching promontories, decent rocky habitat and cover with passerine promise, taking only 10 minutes to walk to across along a causeway as it transports you nearly a mile into the Firth of Forth. The causeway can only be crossed two or three hours either side of low tide before it becomes submerged by the waters of the Firth of Forth, hence my visits here have to be timed carefully so as to ensure I don’t get trapped out on the island:

Cramond Island and the causeway as viewed from the Almond Mouth 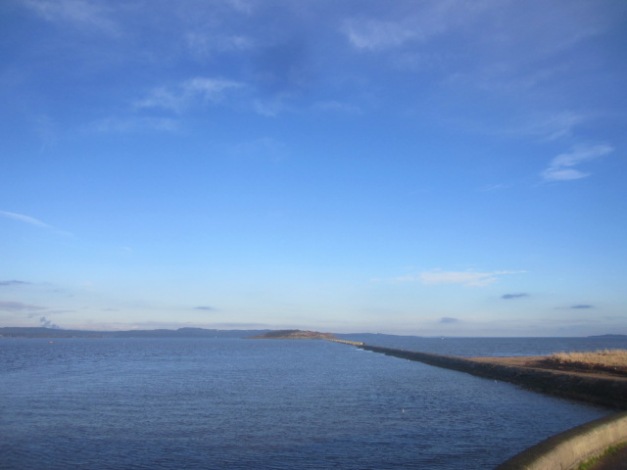 the same view of Cramond Island at (very) high tide

Causewayside Nook – a small sandy nook where the majority of the waders in the area roost. When walking across from Cramond village across the far stretching causeway, this is the first land you hit.

Western Nooks – two small sandy and rocky bays much akin to Causewayside Nook at the north-western and western edges of the island. 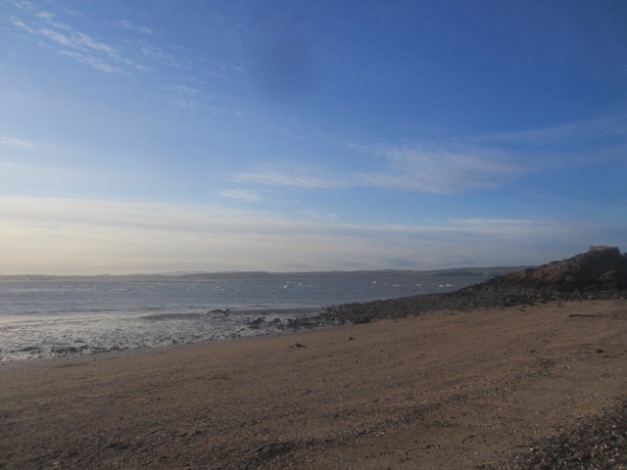 one of the Western Nooks: waders also roost here at high tide

Tegmalm’s Cover – Wooded and coniferous cover where it is presumed that Cramond Island’s famed Tegmalm’s Owl was favouring in the 1880s. As with all cover on the island, this has decent potential for confounded and off-course passerines in the right conditions. 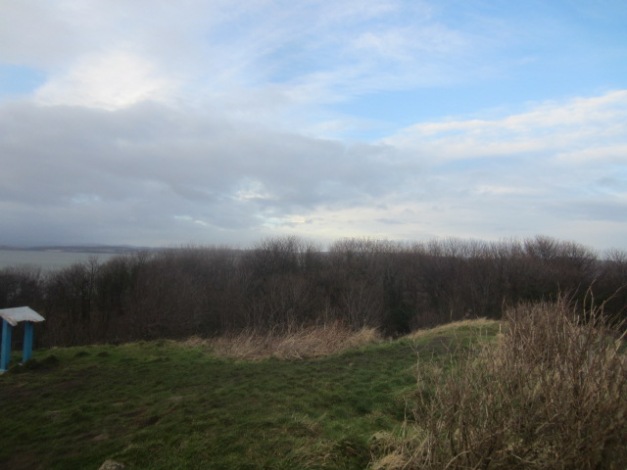 Barracks Point – This promontory, surrounded by ex World War two barracks, is where the majority of seawatching is done. Good for grebes, divers and hopefully would produce decent skua and shearwater passage in the right conditions. The views from here are extensive (from Leith to the Forth Rail Bridge more or less) and encompassed by small islands, with Inchmickery and Inchkeith islands particularly obvious. 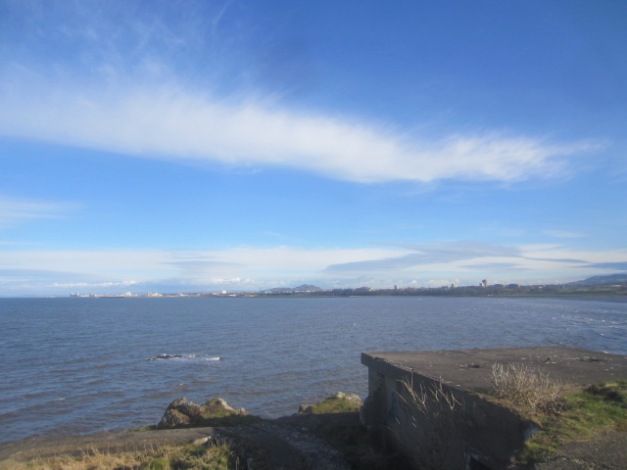 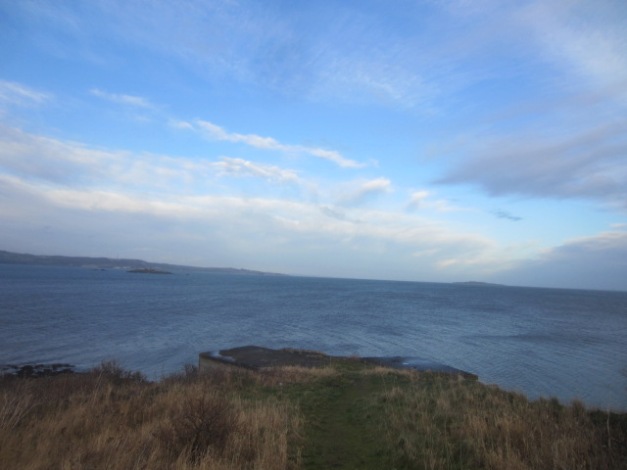 looking due north from Barracks with Inchmickery and Inchkeith both visible

***
It all starts here. Having already had decent numbers of wintering and passage waders, as well as a few reasonably good seabirds, I am confident that Cramond will more than reward some decent effort as time progresses. Like any other patch that is worked hard, it’s going to have the propensity to shock: in what ways, I am excited to see!
Joseph