I might be a bit of scrooge, but certainly when it comes to the present element of Christmas, it’s fair to say I am pretty nonplussed nowadays. Gone are the days of extreme excitement for each and every individual present, that inimitable adrenaline that surges through you as a kid as a seemingly incessant wave of impeccably wrapped gifts wend their way from the tree to your lap. Of course, receiving gifts is still a lovely feeling, a token of unbridled generosity. Yet probably the best ‘present’ I got this Christmas was sourced not from people, but from the patch, as the beloved Costessey House Private Estate reached 100 species on 27th December.

Prior to the glorious day (the 27th, not the 25th), the omens for that vital patch lifer seemed good. On Christmas Eve I’d dug out decent numbers of commoner winter finch flocks, and on Christmas Day a small dabbling duck on the Wensum at Drayton Meadows transpired to be a drake Teal: when there is any duck species minus Mallard on site, there is the potential that it could be anything, as Teal in itself is a very good record for this usually duck free site. So I wasn’t far off that day. I wasn’t able to get out on 26th, and indeed, my time for hardcore patching was limited due to the fact that family had come up from South Africa to visit for the Christmas and New Year period. The 27th was a full day, however, and it started with a bang as two Little Egrets landed on Mill Field, disturbing a group of 8 Red-legged Partridge in the process.

As I started towards Fishermen’s Field along Mill Lane, a Kingfisher landed on a branch by the Wensum, my first ever winter record and the only time that this species made an appearance during my visit. As I neared the corner and the entrance to Fishermen’s I binned a roving group of 5 Redwings in flight. Not far behind them was a chunky passerine, letting out a repeated, ‘chipping‘ call…

BOOM! Common Crossbill: the 100th species for Costessey H.P.E! Get in my son! The wait had been long and painful, after many days of patching during my month’s stay in the summer, and a relatively fruitless October, I’d finally done it, in the nick of time. To get to this stage before the year’s end had been my ultimate patching aim. That Common Crossbill provided it, as it flew towards me and very briefly landed on one of the taller trees above me, revealing itself to be a stonking male and allowing me to 100% eliminate any of the more unusual Crossbill species that have been hanging around in Norfolk in recent months. No sooner had I attempted to get a shot with the DSLR it had flown, continuing westwards towards Taverham and Costessey Pits.

I was absolutely buzzing. This random piece of pool free land, not known for its birds, had just reached 100 species in just under two years of me patching it. When you consider that I am only down in Norfolk maybe 4-6 times a year (so maybe 12-14 overall visits since December 2011 to the region), this is a fantastic feat on the part of the patch. At the beginning of 2013, I had seen 83 species at Costessey H.P.E. 12 months later and 17 new birds in a stellar patching year, all thanks to the motivation provided by Patchwork Challenge. It was a year that included highlights of: 6 Cranes, Bittern, Jack Snipe, Woodcock, summering Hobbies, Spotted Flycatcher, Water Rail and Grasshopper Warblers, among many others. 94 species were recorded in 2013 and 104 points for PWC: only 6 species off the entire patch list total.

What will the patch herald this year? Will 105 overall, or at a long shot 110, be possible? It will be an uphill struggle, but the majority of duck species including Wigeon, Tufted Duck and Shelduck should be possible, whilst waders including Redshank, Curlew and Common Sandpiper are notable omissions likely to occur at some point. Let’s not forget species such as Wheatear, Cuckoo, Bewick’s Swan and Red Kite, which all pass through the Taverham and Costessey area yearly, and Marsh Tit, which occurs literally just off site. This could feasibly raise things up to the 110 mark, yet I’m probably more likely to get species way off my radar, as usual! Whatever happens, here’s to another exciting year on the patch, as it enters it’s second year for Patchwork Challenge.

The remaining patching in 2013 went well, with the rest of 27th and 31st both being very productive days on site. On 27th 8 Teal were picked up in flight at Drayton Meadows, heading east along the Wensum, whilst up to 16 Skylark were part of a large passerine group 80 Goldfinch, 40 Chaffinch and 30 Greenfinch and 6 Yellowhammers on Old Costessey Fields. Cormorant and Meadow Pipit were present daily, the former including 2 roving individuals and the latter reaching a maximum of 8 on Drayton Meadows. A Nuthatch and the young Barn Owl were also noted on 27th, as well as the other side of the New Year on 2nd Jan. New Year’s Eve’s highlight went to the second patch record of Treecreeper : one that I dug out among a sizable group of 15 Long-tailed Tits along the Marriot’s Way at Drayton Woods. The same day heralded a Lesser Redpoll east over Fishermen’s Field, a female Sparrowhawk and a Snipe.

The 2014 patching year has begun healthily, with two relatively full patch checks up until I left on 2nd providing a few of the slightly less regular patch species. Little Egret was noted on both days, whilst 2 Snipe were flushed from Drayton Meadows on 2nd, and the Cormorants and Nuthatch remained. 250 Black-headed Gulls on 2nd between Old Costessey Fields and Drayton Meadows was a record total for the patch. A smart female Great-spotted Woodpecker and Stock Dove gave nice views also on said date, whilst a plastic-as-you-like Muscovy Duck was with 9 Mallards on 1st, and I jammed on a Grey Wagtail at the sluice as I left for the station. With 41 species noted in the first two days, it seems that 2014 is set to be another good year at Costessey House Private Estate: my conservative aim is 85 species for now. Only time will tell us whether the patch will match the same high standards of what was an unforgettable 2013 on site, but one thing’s for sure, I’ll be working it hard! 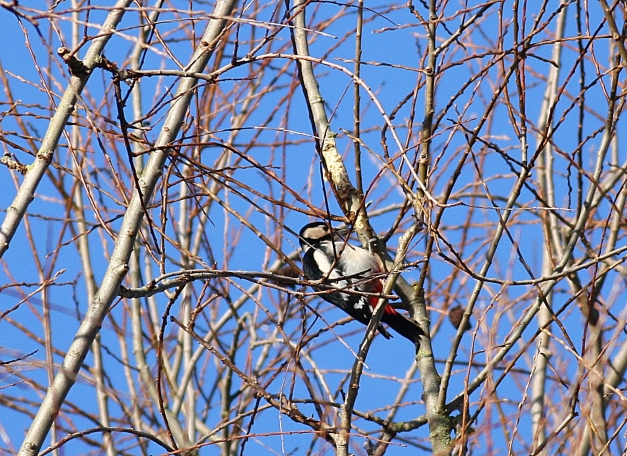